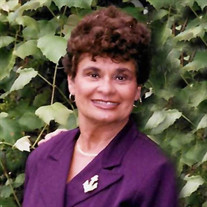 Aidaliz “I-D” Hernandez Stewart, 71 fell asleep in death at her home in Little Hocking, OH on Friday, August 27, 2021. She was surrounded by love and support when she passed away. Aidaliz had Alzheimer’s Disease and had been living with that diagnosis for quite a few years. Her father and mother, Demensio Hernandez & Bautista Gonzalez, welcomed Aidaliz into this world in 1950. Aidaliz was born in a town called Mayaguez on April 28, 1950 on the beautiful island of Puerto Rico. Her upbringing in Puerto Rico was short lived before she came to the United States. She lived with her Aunt and Uncle, Santiago & Inez Aquino in Ohio once arriving in the U.S. She attended Geneva High School in Ohio. However, her higher education began when she was introduced to the truth of God’s Word. She was baptized at the Yankee Stadium during an International Convention of Jehovah’s Witnesses, in New York City in July of 1969. Aidaliz was introduced to Terry in 1970, although they had went to the same high school. Aidaliz had blossomed into a beautiful woman and Terry didn’t recognize the girl he had seen years prior. They had a very short courtship and got married on October 3, 1970, in Jefferson, Ohio. Aidaliz was the love of Terry’s life, and what a grand love story they had! The love they shared will go down in history. It’s an example of love that their children treasure. In 1974 they relocated to Meeker, Colorado with their dear friends, Jerry & Georgia Schultz. While Terry worked secularly, Aidaliz was a hardworking homemaker and diligent Bible teacher. She spent countless hours in the ministry work and it was dear to her heart. She was a faithful Christian servant for numerous years. Aidaliz simply loved people. She was an energetic person who cherished hard work and the results it would produce. She was a hospitable person, full of self-sacrifice. Aidaliz had an energy that was infectious! She lit up a room and made it a happier place to be. Aidaliz was able to stay home while enduring through her illness with Alzheimer’s Disease. Terry was honored to care for his dear wife at home and not in a care facility. He gently gave his precious wife the most loving and devoted care. They were 5 weeks shy of their 51st wedding anniversary. All 51 years they were blessed with, were spent loving one another. Terry adored his wife and was devoted to her. They welcomed Dustin, their first baby boy, on July 31, 1978. Aidaliz absolutely loved being a mother. She was a devoted wife and nurturing mother. She was so happy to find out 3 years later that she was pregnant with their baby girl, Shalene. Terry & Aidaliz warmly welcomed Shalene on July 18, 1981. Aidaliz loved that she now had a daughter. She was again excited to find out 4 years later that she would deliver another baby boy. Derek was eagerly welcomed on July 15, 1985. All three of her children absolutely adore and love their dear mother. Her children meant the world and stars to Aidaliz. Her beloved sons and precious daughter were truly loved by their mother. They have so many precious memories that will carry her memory on. Aidaliz loved to laugh and have a good time and her children loved that. To see Aidaliz happy was everything to them. They knew she loved them and never took that for granted. Her island upbringing, no doubt inspired her love of beautiful things. Aidaliz loved brightly colored flowers, hummingbirds and butterflies. She herself was a beautiful Social Butterfly! Shalene and her mother had a butterfly connection and enjoyed admiring butterflies together or while apart. Love was the predominant quality that Aidaliz always showed. Whether you knew Aidaliz for 20 minutes or 20 years, she treated you like she had always known you. Aidaliz loved people and teaching them the truth from God’s Word, the Bible. The work of spreading the good news held out in the scriptures, was the most fulfilling work that she ever took part in. She loved her family, her friends and the beauty of creation, but Aidaliz loved her God Jehovah, most of all. Aidaliz is survived by her devoted husband, Terry Allen Stewart of Little Hocking, OH; her son Dustin Kevin Stewart, his wife Diedra Elizabeth Anderson Stewart, their 3 children Rylee Scott, Jade Elizabeth and Finley Lawrence of Warren, PA; her daughter Shalene Lisa Stewart Kesterson, her husband Justin Marshall Kesterson of Cutler, OH; her son Derek Levi Stewart, his wife Meredith Diane Crislip Stewart and their son Cullen Levi of Westerville, OH. There will be a Zoom Memorial Service for Aidaliz on September 11, 2021 at 3:00 pm EST. There will be a video presentation at 2:50 pm EST before the service begins. Family and friends will be able to login to observe the service at 2:00 pm EST.

Aidaliz &#8220;I-D&#8221; Hernandez Stewart, 71 fell asleep in death at her home in Little Hocking, OH on Friday, August 27, 2021. She was surrounded by love and support when she passed away. Aidaliz had Alzheimer&#8217;s Disease and had been... View Obituary & Service Information

The family of Aidaliz Stewart created this Life Tributes page to make it easy to share your memories.

Aidaliz “I-D” Hernandez Stewart, 71 fell asleep in death at her...

Send flowers to the Stewart family.