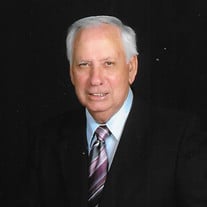 Dale Edward Battin, age 84, of Woodstock, GA passed away peacefully on Sunday, January 23, 2022 after a brave battle with congestive heart failure. Dale was born March 9, 1937 in Parkersburg, WV to Gladys Augusta Battin and Wesley Charles Battin. In his early years he was often referred to by family and friends as “Mike”. He was one of six children. He met Janet Sue Lockhart when they were in junior high school. They married in October 1959 while he was completing his BS in Chemistry at Marietta College. He went on to also receive a MS in Organic Chemistry from West Virginia University and later added an MBA in Management from Georgia State University. During his career, Dale held a variety of positions in the chemical field from technical chemist to Director of Corporate Development at AZS. His work transferred him from WV in 1975. He was most proud, though, of starting his own business, CEMCO, Inc in the late 80’s. He never really retired and continued to dabble in brokering chemical sales until his health started to decline. In his spare time he enjoyed golf, bowling and travel. He had a deep faith and was very active in his hometown church, South Parkersburg UMC and Mount Bethel UMC in Marietta, GA. He found tremendous joy being a grandfather; he loved and was very proud of his twin grandchildren. Dale is preceded in death by his parents, Gladys Augusta Battin and Wesley Charles Battin; his daughter, Kimberly Sue Runyon; and, his wife of 60 years, Janet Sue Battin. He is also preceded in death by three brothers, Harold Richard Battin, William Wesley Battin and Robert Darrell Battin. He is survived by his daughter, Tamra Lynn Gould (John) and their children, Harrison Russell Gould and Evelyn Ashleigh Gould. He is also survived by two sisters, Betty June Armstrong and Mary Margaret Bredon (Jim), and many nieces and nephews. Respecting the risks associated with Covid, the family has made the difficult decision to defer a funeral service locally in Marietta, GA. The family will receive guests between 11:00 am and 12:30 pm on Friday, January 28, 2022 at Vaughan-Kimes Funeral Home in Parkersburg, WV. Also respecting the risks associated with Covid, only a brief funeral service will follow at the funeral home. Interment will be in Evergreen Cemetery South following the service if weather permits. Flowers may be sent to Vaughan-Kimes Funeral Home in Parkersburg, WV. Or, in lieu of flowers, the family kindly asks that you consider a donation in Dale’s name to the American Heart Association by visiting www.heart.org. The family would especially like to thank family and friends who provided support these past 2 years after Janet’s passing. We also would like to recognize the excellent care and commitment shown by Dale’s cardiologists, Dr. Spencer Palmer and Dr. David Delurgio and countless medical staff and caretakers from Brickmont – Woodstock Assisted Living and Agape Hospice.

The family of Dale Edward Battin created this Life Tributes page to make it easy to share your memories.

Send flowers to the Battin family.