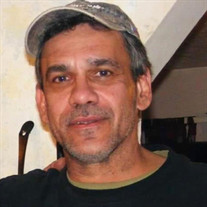 David Michael Burchard, Sr. 58, of Harrisville, W.Va. passed away Sunday, October 3, 2021 from injuries while performing his job at Camden Clark Medical Center. David was born October 13, 1962 in Parkersburg, W.Va., a son of the late Donnie R. Burchard, Sr. and the late Lenora J. McKinney Davis. He was a U.S. Army veteran and employed as a maintenance engineer at Camden Clark Medical Center. David enjoyed tinkering with things and would attempt to fix anything. He enjoyed fishing, working on his truck and being a huge supporter of Donald Trump. David was a determined man and would boast about his family whom he loved very much. David is survived by one daughter, Christine M. Pecori (Anthony) of Parkersburg; two sons, David M. Burchard, Jr. of Harrisville and Joshua R. Burchard of Martinsburg, W.Va.; three grandchildren, Edward J. Hughart, Taylor M. Hughart and Rylee J. Hughart; one sister, Betty J. Bollinger of Parkersburg; two brothers, Donnie R. Burchard, Jr. and Ronald S. Burchard (Alisha), both of Parkersburg; a special uncle, Mike McKinney; nieces and nephews; and his cat, Moe. In addition to his parents, he was preceded in death by a nephew, Jason Burchard. It was David’s wishes to be cremated. A Celebration of Life service will be at the convenience of the family. Arrangements have been entrusted to the Vaughan-Kimes Funeral Home & Crematory, 521 – 5th Street, Parkersburg.

The family of David Michael Burchard, Sr. created this Life Tributes page to make it easy to share your memories.

Send flowers to the Burchard, family.