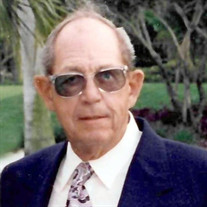 James Gilbert Yonley, 92, of Vienna, W.Va. passed away Wednesday, March 30, 2022 at his residence. He was born January 22, 1930 at Shadyside, Ohio, a son of the late Blaine E. and Bessie R. Mallott Yonley. James was a retired USMC staff sargeant.... View Obituary & Service Information

The family of James G. Yonley created this Life Tributes page to make it easy to share your memories.

Send flowers to the Yonley family.