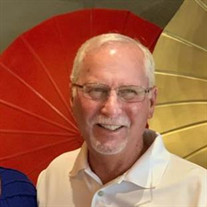 Lester Leroy Hanlon, Jr. of Kure Beach, NC, passed away peacefully with family by his side on July 30, 2021, at New Hanover Regional Medical Center in Wilmington, NC, following an extended and hard-fought battle with cancer resulting from his service to our country. A native of Parkersburg, WV, “Junior” was preceded in death by his father, Lester Sr, and mother, Rose, formerly of Vienna, and his youngest brother, Dennis. Junior was born September 4, 1945, in Parkersburg and graduated from Parkersburg High School in 1963. Afterward, he was immediately called to serve in the Air Force at the Ton Son Nhut Air Base in Vietnam where he obtained the Vietnam Service and Campaign Medals, as well as the National Defense Service and Good Conduct Medals. Not long after high school and Vietnam, Junior married his high school sweetheart, Sandra, and they started a family, ultimately settling in Williamstown. Three sons and their spouses were proud to call him Dad: Mike (Charin), Brian (Christina), and Jeff (Rem). He was forever proud of his military service, and stayed connected through the Parkersburg American Legion Post #15 as well as his unit from Vietnam. He had a successful 30-year career at the United Parcel Service in Parkersburg (Teamsters Local #175). He was the best Papaw to Emily and Jacob, Kaylee and Grace. He was also survived by his brother and wife, Ric and Lee Ann Hanlon, of Little River, SC, along with their four daughters, Julie, Rebecca, Kelly, and Amy, and their families. Junior and Sandra spent much of their retirement in Kure Beach where they recently celebrated their 55th wedding anniversary. He taught his kids and grandkids loyalty, humility, kindness, and to always check their mirrors. At Junior’s request, no traditional funeral services are planned. In early September 2021, a simple graveside service with military honors will be held for his interment at Evergreen Cemetery North in Parkersburg. In lieu of flowers and gifts, the family asks that you consider donating to the American Legion, Disabled American Veterans or the Wounded Warrior Project in his memory.

Lester Leroy Hanlon, Jr. of Kure Beach, NC, passed away peacefully with family by his side on July 30, 2021, at New Hanover Regional Medical Center in Wilmington, NC, following an extended and hard-fought battle with cancer resulting from his... View Obituary & Service Information

The family of Lester L. Hanlon, Jr. created this Life Tributes page to make it easy to share your memories.