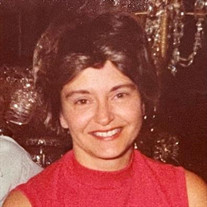 Sandra “Sandy” Lyon Clarke, 81, formerly of North Hills, went home to the Lord March 4, 2022, surrounded by family in Norman, OK. She was born November 16, 1940, in Newark, New Jersey, to Carl and Geraldine (Lovering) Lyon. Sandy married the love of her life, Robert Glasgow Clarke, on May 11, 1963, in Parkersburg, West Virginia; the beginning of a 50-year journey, culminating in renewed vows in 2013. The couple made their home in North Hills with their family before transferring to Norman, OK, with Borg-Warner. In her early years, Sandy practically lived on the water and won numerous state, regional, and national water-skiing championships, was Captain of her cheerleading squad, a member of the Emerson Lanes Bowling League, and enjoyed playing golf. Throughout her life she loved reading, jigsaw puzzles, needle crafts, and her 5 o’clock whiskey sour with her husband, Bob. Sandy thrived as a servant to the community. She volunteered as a Girl Scout Leader in Oklahoma and Michigan for her daughters’ troops. For several years, Sandy worked with the American Red Cross Norman, Oklahoma, Chapter, first as a volunteer then as director of the Disaster Management and Military Services Communication from 1996-2003. Her work there included helping with the May 3, 1999, Moore, Oklahoma tornado, floods in North Dakota and Galveston, Ground Zero support on September 11, 2001, for several months, and Hurricane Katrina support for displaced victims. Additionally, Sandy served faithfully at Memorial Presbyterian Church as an elder and deacon. She served alongside her husband in Kiwanis in several capacities. Sandy’s highest calling was her devotion to her family as a daughter, wife, mother, and especially as Grammy to her grandchildren. From playing games, reading books, or telling stories, she loved being in the presence of family and friends. She was preceded in death by her parents, her husband, and a grandchild, Sidney Pearsall. Sandy is survived by her son, Robert Clarke and wife, Vickie, their son John and daughter Corrine of Orlando, Florida; her daughter, Courtney Garnand and husband Andy with their two sons Killian and Cameron of Norman, Oklahoma; her daughter, Hollis Pearsall and husband Josh with their daughter Alayna and son Joseph, of Norman, Oklahoma. Sandy was blessed with the love and support of her extended family, including nieces, nephews, and their numerous children. Visitation will begin Saturday, March 12, 2022, at 11:00 A.M. at Vaughan-Kimes Funeral Home, 521 Fifth St., Parkersburg, followed by a graveside service and burial at Mt. Olivet Cemetery at 1:00 P.M. The family asks that in lieu of flowers, memorial donations be made to the American Red Cross, Oklahoma Chapter. https://www.redcross.org/donate/donation.html/

The family of Sandra "Sandy" Clarke created this Life Tributes page to make it easy to share your memories.

Send flowers to the Clarke family.